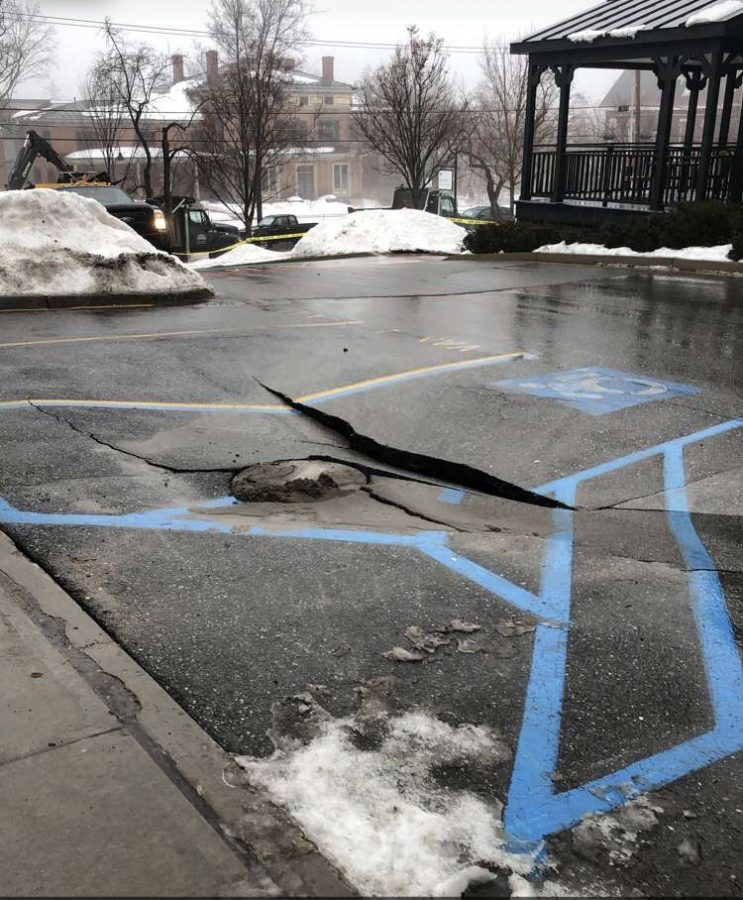 On Thursday, January 24 two water mains broke on South Willard Street, one belonging to the City of Burlington, the other to IDX.

At 9:23 a.m., an email was sent out by Residential Life and Community Standards Operations Manager Melody Brook informing members of Champlain’s campus that a Burlington water main break impacted some of the buildings on campus, including the IDX Student Life Center.

At 10:31 a.m., an update was sent out by Lisa Bunders, the VP of Enrollment Management, announcing that 12 buildings, including IDX, Perry Hall, Rowell Annex and 9 Residence Halls did not have access to water because of the water main break.

“I had to go off campus to a friend’s to shower before work, and I wasn’t able to get water so I’ve just felt kind of off,” Rowell Hall RA Kelly Hillis said. “But I was significantly less impacted than Pearl was.”

Pearl Hall was the only Residence Hall affected by the IDX water break; all the others were without water because of the South Willard burst. Because of the difference, Pearl Hall was not expected to regain water before nightfall like the other residence halls.

“In the afternoon we had an emergency meeting, and we were informed by our AC that there was a good chance we wouldn’t get water back tonight,” Pearl RA Melissa Knowlton said. “We started planning for an overnight in the Champlain room. My Co and I informed residents of an emergency meeting scheduled for 5:30.”

Despite the lack of running water or functional bathrooms in IDX, food continued to be served from the IDX dining hall, though they closed at 7:00 p.m. instead of the usual 11:00.

“We had no water in the kitchen at all. CCM had water so we had to bring water from there and boil it,” Sodexo employee Louise Latulippe said.

In the dining hall, the coffee machines, soda machines and juice machines were down in addition to the kettles, steamer and dishroom. Carafes of lemonade, tea, coffee and water were available all day for students, plus bottled water was available from lunchtime on and canned soda was served with dinner.

Since dishes couldn’t be done, all the food was served on compostable dishware, and compostable utensils were put out.

“We just kept up our sanitation part and tried to do the best with what we had,” Louise said. “This is the first time for this.”

For hand washing, employees kept water heated on the stove so they could maintain sanitation standards. All the food served was cooked using the oven or the grill.

After the dining closed, staff planned on running all the impacted machines to flush out the contaminated water so they could be cleaned and ready to run for breakfast on Friday, January 25.

“Unless something happens during the night, we should be all set for tomorrow morning,” Louise said.

A giant pothole outside IDX was caused by the process of repairing the water main break, according to the workers fixing it. It is also expected to be filled by morning.

At 5:13 p.m. an email was sent out by Bunders announcing both breaks had been repaired, and water had been restored to all the affected buildings.

Due to the restoration of water, residents of Pearl were able to stay in their hall overnight and Knowlton cancelled the emergency meeting.

“The afternoon was a bit hectic trying to get in touch with everyone, but my day was nowhere near as hectic as my superiors,” she said. “I’m grateful for all the work they put in and also super grateful to have water tonight and not have to pack all my stuff up and go to the Champlain room.”