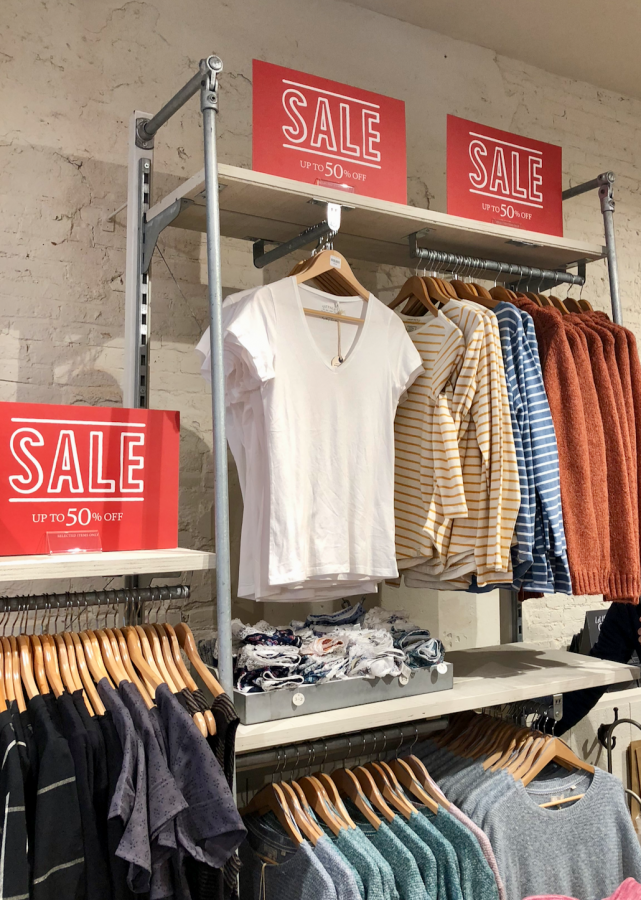 Church Street is one of the most popular tourist destinations in Burlington. It’s known for its variety of stores, but I wanted to know just how easy it was to navigate and afford these shops. That’s why I went on a journey to find the best plain white T-shirt for the best price.

The first clothing shop I saw was FatFace, and with a name like that I had to see what it was all about. I walked in and was immediately struck by how small it was. There was barely enough walking space for one person between each rack, and I immediately felt claustrophobic. Luckily, one of the first items I saw was a plain white, V-neck tee. However, the sizing and pricing were in the UK scale, and it took me a second to see the conversions in small print. The sizes didn’t go small, medium, large, but 12, 14, 16, and so on.

The shirt itself was one of the softest pieces of clothing I had ever felt. It was the kind of soft where I felt like I was wearing a blanket. Not only was it comfortable, but it looked good too. It wasn’t see-through at all, which happens to be a problem with white T-shirts. The V-neck style is a good look on anyone and a great choice on FatFace’s part. The fit seemed best for tucking into pants or skirts since it was snug on the bottom. The main problem with it was that the collar didn’t lay flat, causing the shirt to be too big on top and tighter through the torso.

Free People had a late seventies to early eighties vibe mixed with some modern styles, so they were on trend with the atmosphere of 2018 Burlington, Vermont. I got distracted by some corduroy during my search for a plain white t-shirt, and in the end I had to ask a very nice saleswoman because I had no luck. The plainest of their white tees was not exactly what I was looking for, but it would do.

There were precut holes in the bottom hem of the shirt and along the back of the collar, making it impractical for layering under things without being the main piece. It also had the look of being inside out, but–don’t worry, I checked–it was just what the designer was going for. The neckline was a little low for my taste, but not so much so that someone else wouldn’t like it. Softness was kind of an afterthought for this shirt because I was distracted by the slits that cut up to the waist of my pants on each side, throwing off the proportions and causing the shape to be boxy. As for durability, I wouldn’t trust it. One catch and that’s the end of this $38.00 shirt.

My third stop of the day included two T-shirts that were almost exactly the same but had different price tags. As soon as I found the T-shirt section in ECCO, an eager saleswoman came up to me and said that the one in my hand was the “most comfortable T-shirt on the planet.” I decided to see if she was right, grabbed another shirt from a different brand, and headed for the dressing room.

I tried on the first one, which was from the brand James Perse. Thanks to the black pants I was wearing that day, it was easy to tell just how see-through the shirt was. I felt uncomfortable and didn’t want to step out of the dressing room, let alone wear it out on the street. The depth of the V-neck was perfect but the fit was too small even though it was my size. The price was a whopping $75.00, which I initially thought was a mistake for such a basic and thin piece of clothing, but it was the correct tag.

The next shirt was from the brand Velvet, the only difference being that it was the slightest bit thicker than the previous one. It was also a size down from what I usually wear but it fit better than the James Perse. Though I thought the second shirt was better and would cost more, it actually turned out to be the cheaper option at just $58.00. 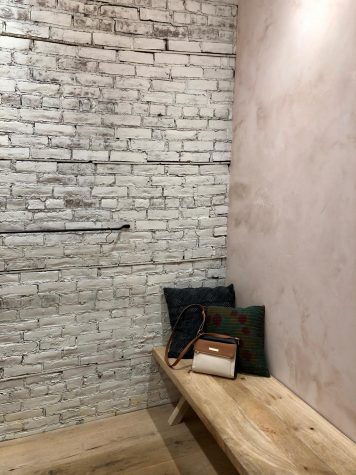 This was my final stop. I have frequented the store many times but never bought any clothes, as I always thought they were too expensive. But, once I saw the prices in the other stores that day, Urban seemed reasonably priced. I also feel out of place there. It’s very ‘millennial-hipster’, making me feel like I don’t belong with my plain black jeans and dirty sneakers.

I couldn’t find a normal, plain T-shirt, but they did have a ‘family’ collection, ranging from the Little Brother Tee to the Mom Tee. I chose the Little Brother because it seemed thicker than the others and it had the most diverse selection for sizes, which rarely ever go above a large in-store. This one was the only crew neck shirt of the day, and it fit just right so I didn’t feel like I was choking. The shirt itself was short, just reaching past the waist of my pants. It could have been tucked in or worn out: it would work on its own or under other layers. The fabric was thick and I didn’t feel exposed like many of the other shirts made me feel. The softness was average since nothing could compare to that first plain white tee I tried on that day. For only $20.00, I’d say it was a great deal.

I made a couple other stops along the way, but a lot of them didn’t even sell plain white T-shirts. Plus, I walked into Jess Boutique, saw a jacket for $500.00, and walked right out. Out of all the options I had found, I decided to buy one of the shirts online. The winner was… Urban Outfitter’s Little Brother Tee. Though it wasn’t exactly the style I was looking for, I really liked the feel and fit. The atmosphere of the store itself, however, could improve, but that’s what online shopping is for. Church Street as a whole has a never-ending range of differing stores. Whether you’re looking for a plain white tee or a giraffe-print bean bag, there’s always a place to go if you just keep walking.