The Shield: Cops as Criminals 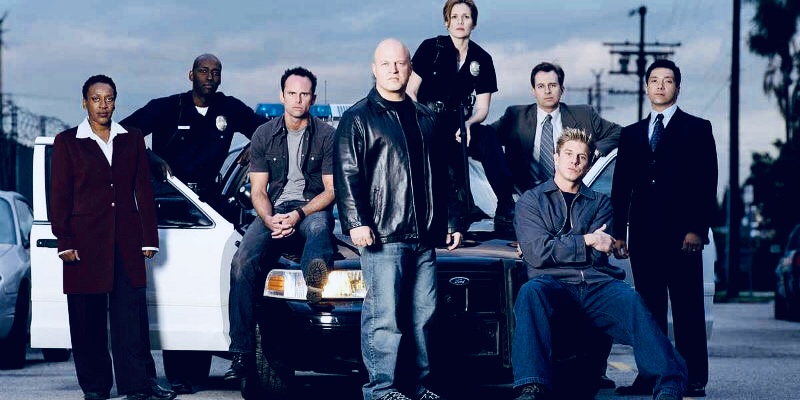 “Good cop and bad cop left for the day, I’m a different kind of cop,”

Those were the words that formally introduced audiences to Vic Mackey; few other descriptions could do the character justice. While television wasn’t short on maverick police officers, Vic Mackey was a different beast entirely. Corrupt, sociopathic, and utterly ruthless, Mackey ranks among the most ethically disgraceful characters in TV history. He was also the main protagonist of FX’s The Shield, one of the most important cop shows of all time.

Released just one year after 9/11, The Shield was an FX show created to rival the high quality storytelling of HBO programming like The Sopranos and Six Feet Under. The show was set in Farmington, a fictitious district of Los Angeles overrun with crime and poverty. Drug dealers, gang members, and serial killers littered the streets. Michael Chiklis stars as Vic Mackey, the leader of a specialized police strike team created to combat crime within the district. Under his supervision, the strike team is efficient, brutal, and hopelessly corrupt. They pocket drugs, beat suspects, and break the law on multiple occasions.

The power of his occupation gives Mackey an inflated sense of self-importance, allowing him to justify any moral wrongdoing as a necessary evil. Sure, he breaks the law, but he does so in a way that never contradicts his own ethics. What better way to get a confession than harassing a suspect? Mackey believes he is never on the wrong side of the law, so his morals reflect what is true and just—at least, that’s what he tells himself every time he engages in an act of corruption.

The pilot illustrates all of Mackey’s dangerous flaws perfectly, introducing viewers to a monster of a man. Yet for all of his flagrant acts of corruption, many viewers still found themselves rooting for him. Numerous fans of the show, some of which include real life police officers, defend the violently corrupt strike team as heroes, while only a few were willing to recognize him for the facist he truly was. Audiences were more than willing to look the other way whenever Mackey engaged in an act of police corruption, so long as he continued to uphold the status quo. The strike team may be vicious brutes, but they protect white americans from drug dealers, gangs, and murderers. Who cared if they trampled upon our civil liberties to do so?

Part of what makes The Shield’s deal with the cop-coded-devil so enticing is Michael Chiklis’s work in the lead role. In the hands of any other actor, this show would have crashed and burned. One could easily fall into the trap of making Mackey too vile a protagonist, or worse, choose to ignore the role’s problematic nature by making the character sympathetic. Chiklis strikes that perfect balance of charismatic, cunning, pitable, and terrifying.

Buried deep below Mackey’s toxic machismo lies a surprisingly charming anti-hero, for Chiklis provides the role some magnetic charisma. Yet with just the slightest shift in his face, Mackey transforms into a haunting goliath of anger and violence. Looking into his eyes, you don’t see a man, but a mad dog ready to pounce. Bouncing back and forth between these two extremes is no easy feat, but Chiklis does it flawlessly.

There are moments where you want to like Mackey. At his best, he comes across like a charismatic caregiver desperately trying to protect his community, risking his life to keep good people safe. However, The Shield never lets you forget the monster hiding underneath his charismatic facade. At his core, Mackey is a control freak, motivated by an arrogant desire to hegemonize every facet of his life. Chiklis consistently portrays Mackey with a disturbing sense of authoritarianism, even when he’s at his most heroic. Such a performance makes it impossible to ignore the character’s evil nature. So we are left with a choice. We can recognize Mackey, and cops like him, as corrupt fascists taking advantage of a broken institution. Alternatively, we ignore their flaws, and continue to pretend that their method of policing creates societal security.

Unflinching in its depiction of barbaric police brutality, The Shield was the rare cable drama to actively critique the establishment as a whole. Many cable shows provide a glamorized view of police work to viewers across the country, such as Law & Order, Criminal Minds, and Blue Bloods. These television programs teach us that police officers are unequivocal forces of good, existing only to keep us safe from the endless array of criminals lurking within the shadows. Everything they do keeps Americans safe, even if they have to bend procedure to do so. The Shield refused to perpetuate this pro-cop message, instead challenging the way audiences viewed police misconduct.

One question lies at the heart of The Shield: What are you willing to accept to feel safe? Shawn Ryan and his writers forced the viewer to contend with that ethical inquiry throughout the entire show’s run, refusing to provide an easy answer. We understood Mackey, and many truly wanted to believe his corruption was simply a necessary evil. Americans look at cops like guardian angels, the last line of defense between civilized society and anarchic disorder. Challenging the institution means doubting that line of defense, so many are more than willing to ignore horrific police brutality in favor of maintaining this false narrative. Vic Mackey simply asks us how much depravity we’re willing to ignore in favor of this fantasy.