Tokyo Godfathers: The Best Christmas Movie You Never Heard Of 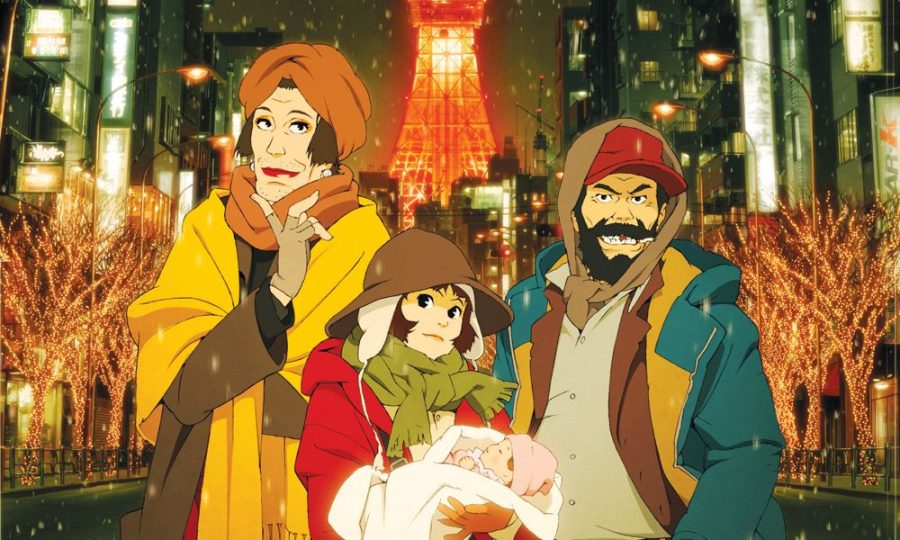 With the holiday season underway, many brace themselves in preparation for the customary force-feeding of Christmas classics. Films like Miracle on 34th Street, Elf, and A Christmas Story will be shown on repeat in many households throughout the holiday season, and you’ll be sick of them well before we get to the new year. While there’s nothing wrong with (most) of these yuletide classics, audiences are overdue for some variety in regards to their holiday watchlist. This is where Tokyo Godfathers comes in, a wonderful bundle of animated joy brought to life by renowned filmmaker Satoshi Kon (Perfect Blue).

Tokyo Godfathers boasts an unconventional narrative, rich in tragic irony and heartwarming comedy, focusing on three homeless people who are long overdue for a Christmas miracle. Our cast of characters include Gin, a miserable alcoholic, Miyuki, a teen runaway, and Hana, a former nightclub singer. On Christmas Eve, this trio of misfits discover an abandoned infant in a dumpster, leading them on a quest to find the child’s mother before the end of the night. This odyssey throughout Tokyo’s bustling nightlife introduces the lead characters to many unique individuals and strange twists of fate, with the group forming a deep familial bond through their noble quest.

Throughout the film, it is abundantly clear that Hana, Gin, and Miyuki truly care for each other, providing a wonderful example of a found family. Rather than throttle the protagonists through an onslaught of suffering, the script highlights the warmth of their bond. Despite their differences, the three are united through their desire to do right by this child, improving each others’ lives in the process.

The true beauty of Tokyo Godfathers can be found within it’s wonderful characters. Those familiar with Keiko Nombuto’s work on Cowboy Bebop and Wolf’s Rain know that she is a master of characterization, and this film is no exception. Gin, Hana, and Miyuki are all fascinating individuals, proving to be rich in both complexity and effusive likability.

Hana, a deeply religious trans woman who dreams of motherhood, is a true stand out amongst the cast. Her life is marked with hardship; Hana contends with poverty, disrespect and a world that refuses to recognize her gender. That being said, Hana’s suffering doesn’t define her as a human being. What makes Hana such a great character is how she uses her immeasurable will to persevere through adversity, refusing to let a cynical world take away the joys of life.

Watching such a strong woman bounce off an extremely cynical individual like Gin—an alcoholic running away from the past—makes for outstanding entertainment. The two characters frequently find themselves at odds throughout the film, with their arguments serving as both a source of comedy and tragedy. The narrative makes it crystal clear that Hana and Gin care deeply for each other, even when their clashing ideologies result in harsh verbal sparring. Gin and Hana’s emotionally nuanced dynamic result in interactions that are either funny, heartwarming, or gut wrenching, always supplying the narrative with a great deal of pathos.

Tokyo Godfathers refuses to downplay the tragedy of homelessness, instead casting an empathetic eye over those society has left behind. Kon and Nombuto make the trials and tribulations of poverty painfully clear, detailing how the leads are subject to hunger, destitution, and assault. Such moments of heartbreaking realism help ground Tokyo Godfathers’ narrative, adding great weight to the film’s themes of love and perseverance.

Despite the seedy environment of Tokyo Godfathers’ setting, it’s still a beautifully crafted piece of cinema. Satoshi Kon’s unparalleled eye for detail is on full display here. Every frame of animation feels incredible throughout and lovingly crafted. Tokyo is filled with numerous small touches that help give the setting its own personality, with Kon finding the beauty within the city’s trash ridden streets. The world of Tokyo Godfathers feels like it’s bursting with life, with the masterful animation proving to be a character of its own.

Supplementing Kon’s gorgeous visuals is the quality of the GKIDS English dub, improving upon an already great film. Keiko Nombuto’s dialogue translates extremely well to the English language, thanks in large part to a dubbing team that is able to reinterpret her words without losing the soul of her dialogue. The leading cast members do a fantastic job maintaining the perfect chemistry necessary for the film’s comedic banter to land.

Hana’s English voice actor, Shakina Nayfack, proves to be substantial improvement over her original japanese counterpart, Yoshiaki Umegaki. Not only is Nayfack’s voice more fitting for the role, but her comedic timing is impeccable, as is her understanded sense of dramatic conviction. While both versions of Tokyo Godfathers are masterful films, the strength of it’s English dub enhances the viewing experience immeasurably.

No other Christmas film understands the true spirit of the season like Tokyo Godfathers. This movie may not have brightly colored gifts or flying sleighs, but it has an abundance of heart. A celebration of found family, the film deals with harsh truths to highlight the true beauty of human kindness. Satoshi Kon’s urban odyssey isn’t concerned with simple individuals or hackneyed values, instead showcasing the greatness within those society has left behind. To put it simply, those in search of a Christmas film that actually embodies the positive aspects of the holiday can’t do much better than Tokyo Godfathers.