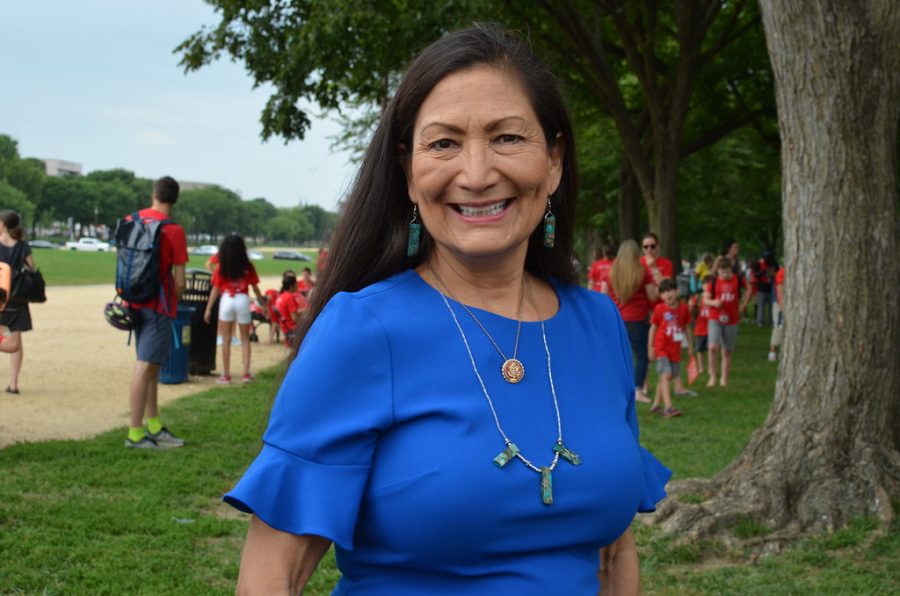 Deb Haaland at an event raising awareness for air pollution.

In December, President-Elect Joe Biden chose Deb Haaland, a congressional representative from New Mexico, to lead the Interior Department. Earlier this month, Haaland took one step closer to becoming the first Native American to serve in the cabinet last week when the Senate Energy Committee voted 11-9 and approved her nomination.

Haaland is a 35th generation New Mexican who is an enrolled member of the Pueblo of Laguna, which is a Native American tribe located near Albuquerque, New Mexico, and she has Jemez Pueblo heritage.

In 2018, she won New Mexico’s first congressional district and became one of the first Native American women to be elected into Congress.

UPolitics asked her about what it was like to be one of the first Native American women in the House, and Haaland said, “Every day for me I realize the weight that’s been put on my shoulders, but I gladly take it and will do everything I can to make sure that I am working toward what we should all be working toward, and that is to make sure that everybody has a chance to succeed in this county.”

Haaland explained that she turned to politics when she noticed not enough Native Americans were voting. At first, her political career started with a lot of volunteer work. She’d go into campaign offices of the candidates she liked and ask for lists of Native Americans who she could call. Then she started showing up to those communities, knocking on doors, and registering voters. She would go to the Navajo nation fairs and Pueblo feasts days, and set up a booth to register voters. When it was time to vote, Haaland drove them to the polls.

Her volunteering led to her work in the 2012 Obama campaign. After that, she ran for Lieutenant Governor of New Mexico in 2014. Haaland lost the general election, but it didn’t stop her from becoming the head of the new Mexico Democratic Party the next year.

“I became the state chair of our party in 2015 and we won across New Mexico. We had lost our statehouse in 2014 and we won it back in 2016 under my leadership,” said Haaland to UPolitics. “When I finished my term there I thought ‘maybe I could run for Congress.’”

In her opening statement at her confirmation hearing, Haaland recalls the summers she spent at her grandparents’ traditional home in Mesita, a small village on Laguna Pueblo.

“It was there that I learned about my culture from my grandmother by watching her and by participating in traditional feast days and ceremonies,” Haaland described. “It was in the cornfields with my grandfather where I learned the importance of water and protecting our resources where I gained a deep respect for the Earth.”

Haaland grew up in a military family. Her mother, Mary Toya, is a Navy veteran and was a federal employee for 25 years at the Bureau of Indian education. Her father, Major J. D. “Dutch” Haaland, was a 30-year combat Marine and was awarded the Silver Star Medal.

Growing up Haaland attended 13 different public schools during her father’s military services. Haaland said that “no matter where we lived, my dad taught me and my siblings to appreciate nature. Whether on a mountain trail or walking along the beach.”

“I’m not a stranger to the strugglings many families across America face today.” Haaland continued to talk about her experiences as a single mother. Like many Americans, she had to rely on food stamps, lived pay-check to pay-check, piece together healthcare for her and her child, and struggled to get through college.

Haaland earned her degrees from the University of New Mexico and UNM Law School. For many years, she ran her own small business producing and canning Pueblo Salsa. After that, she became the first Chairwoman elected to the Laguna Development Corporation Board of Directors, where she oversaw business operations of the second largest tribal gaming enterprise in New Mexico. There, she was able to successfully advocate for earth-friendly business practices.

The mission of the Department of the Interior is to manage and conserve the United State’s natural resources and cultural heritage, provide scientific information about natural resources and hazards to address societal challenges, create opportunities for Americans, and honor the Nation’s responsibilities and commitments to Native Americans. It’s also responsible for running the Bureau of Indian Education and the Bureau of Trust Funds Administration.

Haaland’s position would be crucial in this department, as it’s had a large role in the dislocation and abuse of Indigenous communities in the US.. Native Americans have demanded a greater voice in this department and have fought against its policies. The New York Times mentions the time in 1972, when about 500 activists took over the department’s headquarters in Washington DC, protesting broken treaties and better living standards. By being voted into the Interior, Haaland would be responsible for the well-being of the US’s 1.9 million Indigenous people.

Haaland would also oversee a department responsible for around 500 million acres of public land, including national parks, oil and gas drilling sites, and endangered species habitat. She would also play a major role in executing Biden’s climate change agenda. Her responsibilities would also stretch over to territories that the Trump administration opened up to drilling, mining, construction, and logging.

Haaland has heavily criticized the policies that have opened millions of acres to gas and oil. In early 2020 she said, “the sad fact is that we have a president who is intent on selling off our public lands to his friends for fracking and drilling.” By being a part of the Interior, she could be tasked with restoring protections over these lands, which she says are “now opened to leases and desecration by extractive industries, which will exacerbate climate change and destroy countless sacred sites and erase our history.”

In a statement, Haaland said, “It would be an honor to move the Biden-Harris climate agenda forward, help repair the government-to-government relationship with Tribes that the Trump Administration has ruined, and serve as the first Native American secretary in our nation’s history.”

“A voice like mine has never been a Cabinet Secretary or at the head of the Department of Interior,” Haaland tweeted after being nominated by Biden. “Growing up in my mother’s Pueblo household made me fierce. I’ll be fierce for all of us, our planet, and all of our protected land.”