Students reacted in several different ways to the news. 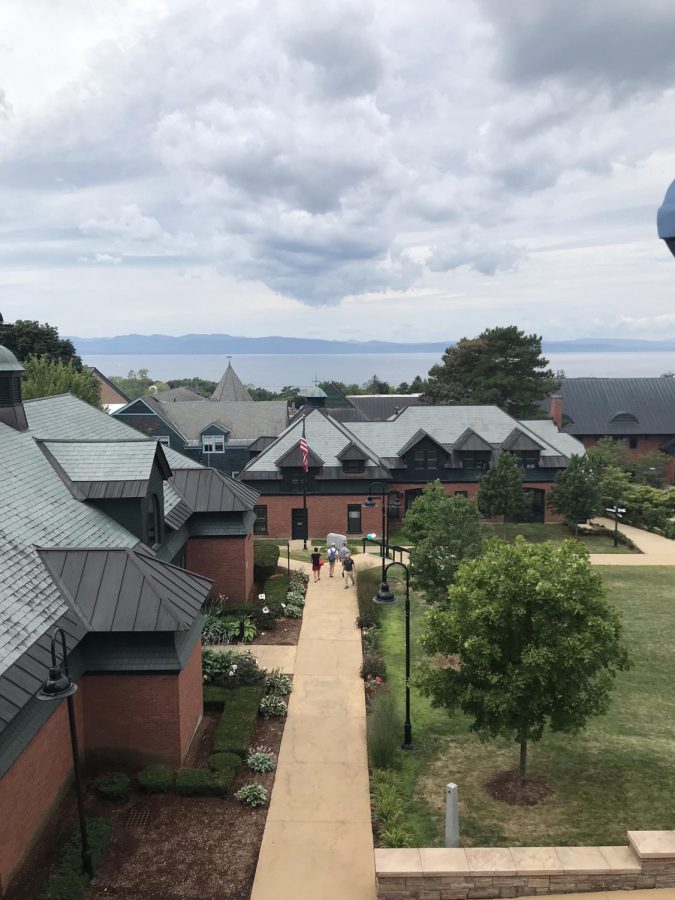 Photo of campus from Library, taken by Haley Seymour in 2019.

Champlain College will be holding a virtual commencement for the second year in a row on May 15, 2021.

Students reacted in several different ways, some being grateful for the safety of the situation, while many others were angry, saying that it was too early to understand the state of  the pandemic in May. Joe Biden announced on Mar. 2 that every adult in the United States would have access to the COVID vaccine by the end of May.

There is also currently a petition circulating around Champlain College, titled, “In-Person Graduation for Champlain College Students.” The writers of the petition explained: “Champlain’s motto is ‘Audeamus’ or ‘Let Us Dare.’ And yet at this time, they have chosen to take the path of least resistance. We are encouraging staff, students, family, & loved ones to show their support.”

Business Administration major Amaya Baustert (‘21) wrote in the comment section of the Facebook post that broke the news: “Very disappointed that we go to such an innovative college yet we can’t find a safe way to graduate in person? Is this decision made because of health and safety or financial reasons? Oh and no spy glasses? Cool.”

Typically, students receive a pair of spy glasses when they graduate. Facebook comments alleged that it was the Student Government Association who made the decision to end the tradition.

“One of the first things we were promised coming into college were these beautiful spy glasses that we will receive as we graduate. One of the few tokens that I was excited to get and have as a talking piece sitting next to my diploma,” Baustert said. “Turns out the decision to get rid of these spy glasses was made and no one was really informed about it.”

Baustert explained that she feels there were other solutions to the issue of having a safe commencement. She noted, “I did not have my expectations high that we would have a normal commencement but I had a lot of hope that the school would have been able to come up with something, considering they had over a year to plan it and had plenty of inspiration from other schools.”

Accounting major Mia Andreozzi shared a similar opinion, saying, “I was hoping for a social distanced ceremony of some sorts, or just something where I could physically receive my diploma in person.”

Champlain College President Benjamin Ola Akande explained why they made the decision now, rather than waiting: “A big event such as commencement requires many months of planning. We also wanted to let our students know as soon as possible to make appropriate plans.”

Many students, specifically seniors, suggested other ideas besides a virtual commencement, and wondered if the Champlain College staff had thought of any other plans before making their final decision.

“We explored many different options such as having a series of smaller ceremonies, a ‘drive-in’ ceremony, or a ceremony for those on campus, and other ideas,” Akande explained. “The current state guidelines for travel and in-person gatherings and events do not allow for those options for all of our students.”

Baustert described some solutions she believes Champlain administration could have made, instead of a virtual ceremony: “Middlebury College, that is very comparable in size, will be planning a ceremony for those that are graduating that are on campus. This is something that Champlain could easily do. They could also split up the majors to have different ceremonies, or a hybrid where students that are in the testing pool attend an in person ceremony, socially distanced at the Expo. There are a lot of ways they could do this but holding a virtual commencement is not what we worked for.”

Andreozzi expressed a similar solution, saying, “I believe that they could have decided to have a local students and testing pool students only ceremony, with the rest of commencement online.”

Another reason behind the decision was to ensure that all Champlain students feel included; even the ones who remained fully virtual this year.

“We feel it is important to have a commencement ceremony that is inclusive of all of our students,” Akande noted. “A virtual ceremony will be accessible for students who are studying in Burlington right now and those who are located across the country.”

Several students, specifically in the comment section on the announcement Facebook post, declared that this was likely a financial decision, rather than one based out of concern for the health and safety of students, faculty, and families. Akande explained: “The decision to hold a virtual ceremony was not based on financial considerations.”

Baustert argued otherwise, saying, “I do think it was financial reasons. Other colleges in Vermont have already put out that they will be doing commencement for just the graduating students to attend. We also received an email that the school is functioning at a 6.9 million dollar deficit this year. To them this was just money they didn’t have to spend.”

“I do think that financial reasons did influence this decision to some degree,” Andreozzi agreed. “I understand the need for health and safety precautions and why a traditional graduation ceremony would not be possible. That being said, it was likely the cheapest option for them to just have it completely online.”

According to the Institute for Health Metrics and Evaluation, COVID cases are projected to steadily increase through June, although there have been few COVID cases in the Champlain community.

Baustert explained the loss of graduation and what it means to her and her peers, saying, “There are a few major pillars in life that should be celebrated. Not everyone will get the chance to have them, but this graduation is something that we worked hard for and that every senior should have.”

Akande said that a survey was sent out to seniors, asking for their opinions on how to make this virtual ceremony better. He continued: “It is our intention to give our students the most positive and inspiring send-off possible. We hope students will find ways to take advantage of the virtual format to include more family members and loved ones who may not have been able to attend an in person ceremony. We will also look for ways to bring the Class of 2021 back together on campus in the future.”

When asked what Champlain College could do to make the news of a virtual commencement better, Baustert chose not to respond, and Andreozzi simply said, “Nothing.”