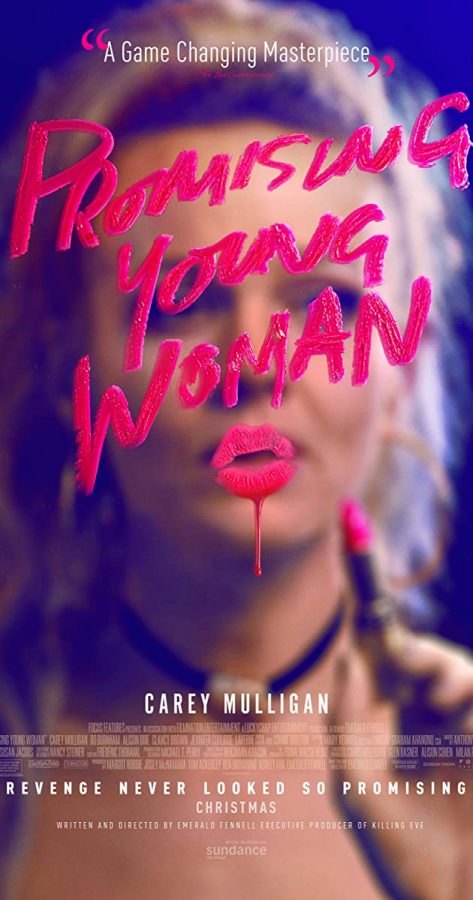 The world is not a kind place to women. That’s not to say that we haven’t made great strides reaching true gender equality, especially given the #Me Too movement, but we’re still not quite there yet.

Women are still subject to cat calling, harassment, and sexual misconduct, but many still have yet to realize that those who perpetuate this problematic culture are more than just Tyler Durden-esque characterictures of toxic masculinity.

This is where Emerald Fennell’s Promising Young Woman comes in, a wonderfully entertaining thriller that serves as a deceptively layered examination on how society ignores the victims of sexual misconduct, and how the media in general can misinterpret the reality of these horrific situations.

Promising Young Woman stars Carey Mulligan as Cassandra Thomas, a 30 year old woman who seems to be slumming her way through life. Once a talented med school student, Cassandra now lives with her parents and works at a coffee shop,  with seemingly no aspirations to improve her life. However, she is a completely different person after sundown, spending her nights feigning drunkenness while waiting for some guy to try and take advantage of her, only to proceed to scare them straight at the last possible minute.

We don’t know why she does this, but she seems to be content with doing for the rest of her life. However, things change for Cassandra when she meets Ryan (played by Bo Burnham), an old colleague from med school who happens to harbor feelings for her. Cassandra’s relationship with Ryan contrast with her own desire to rectify the sins of the past, as we slowly discover what led her to give up her career as a med school student in favor of her vigilante lifestyle. And the more we discover about Cassandra’s past, the more we understand just how toxic our understanding of abuse really is.

One of the most fascinating things about Fernell’s screenplay is the way in which she deconstructs the much loathed “nice guy” archetype. Those unfamiliar with this trope should consider themselves lucky, though I’m afraid many of us have experienced this kind of individual in some form or another.

The “nice guy” is someone who believes they are entitled to have a woman because of their personality. In media these characters often express problematic behavior, yet are given a pass for a variety of reasons. Perhaps they’re a lovable loser, or maybe they are simply far less outwardly misogynistic than the keg guzzling alpha males they are competing against. However, that doesn’t mean that these people are any less problematic than an overt misogynist. Time and time again we see that the most dangerous men Cassandra encounters aren’t the obnoxious cat callers, but instead the “chivalrous” nice guys who offer to take her home so they can have their way with her.

Fernell showcases that this problem goes deeper than simple male toxicity, revealing that American culture at large is predisposed to ignore women who speak out against sexual assault. Cassandra confronts both men and women who express willful blindness towards these issues and reveals that their silence is almost as harmful as the act itself, creating a culture in which abusers can get away with their misdeeds. All that being said, you’d be forgiven for thinking that Promising Young Woman is a bleakly depressing thriller, yet Fernell manages to make this film just as entertaining as it is thought provoking.

The biggest surprise about Promising Young Woman is just how much fun it is to watch, despite the extremely disturbing subject matter. As a thriller the movie is extremely well constructed, for the narrative contains endless surprises and many masterful sequences of suspense. It’s also a gorgeous looking film, with many of the vibrant colors popping off the screen. This visual style could almost be described as saccharin, and would clash with the dark tone in the hands of a poor director, but it works perfectly here. The world of Promising Young Woman may look pretty on its surface, but beneath that appealing exterior lies a society rotten to its core, albeit one teeming with a wicked sense of humor.

Fernell mines a lot of dark laughs throughout this film, often at the expense of pathetic men who try and take advantage of Cassandra, yet never does so in a way that disrespects the movie’s subject matter. And the cast is simply flawless, with Carey Mulligan delivering one of the best performances of 2020. She is captivating in this film, proving to be intimidating, sympathetic, and uniquely funny all at once. The supporting cast doesn’t lag far behind, with Bo Burnham delivering a fascinating performance that grows more interesting throughout the film. Laverne Cox proves to be a perfect fit for the movie’s tone, thanks in large part to her perfect comedic timing and dry delivery. The movie is also filled with some amazing actors like Max Greenfield, Alfred Molina, Alison Brie, Adam Brody, Jennifer Coolige, and Clancy Brown, all of whom are given at least one scene in which to shine.

Promising Young Woman is a rousing success, and easily one of the cinematic highlights of last year. While it’s not perfect – the ending is choppy and doesn’t flow well – it’s thought-provoking and wildly entertaining. The film does a great job showing just how dangerous these so called “nice guys” can be, and also has a lot of fun while doing it.