How this unprecedented flex-hybrid semester looked from the other side of the zoom camera. 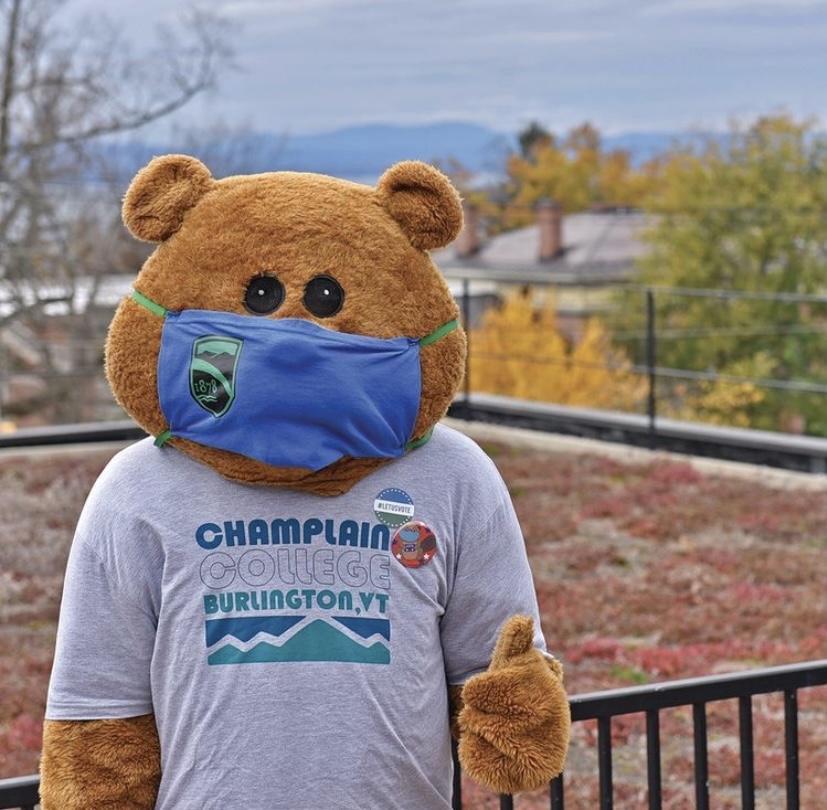 Chauncey T. Beaver wearing a mask before everyone went virtual.

At first glance, professors are feeling the same way about this semester as we are. Professional Writing professor Sheila Liming, this semester her first at Champlain, describes it as, “Challenging, to say the least,” while Core instructor Megan Spiezio-Davis notes it feeling, “Bizarre and surreal.” Many students share this sentiment, too.

Students have been dropping out at a higher rate this semester than past semesters, of which professors are well aware. A recent study published by the Urban Education Institute(UEI) reports that over half of students find remote learning less engaging. And as hard as students are working to bridge that gap and keep grades up, professors are working just as hard, and facing just as many hurdles.

“As an educator, the biggest hurdle was teaching to a screen with humans on the other side, instead of teaching to humans in a room using a screen as an auxiliary tool,” says Spiezio-Davis. Several other professors mentioned that disconnect from the usual close, in-person classroom interactions as well.

Liming says, “Classes in my discipline tend to be discussion-based: students share work, get live feedback, discuss readings, workshop, etc. All of that proved nearly impossible over Zoom, because the collaborative, ‘live’ element was missing.” In an online environment not at all conducive to natural conversation, professors are not able to foster the discussions and debates they’re used to holding.

Core professor Sanford Zale notes physical issues with remote teaching as well, citing the eye strain, headaches, and back pain that come with sitting in front of a computer all day. For both students and teachers, the physical challenges that come from the sort of screen time and position that remote learning requires are often overlooked. As the human body gets older, it becomes more prone to the physical problems remote learning instigates.

Many professors view this semester as a loss. Not just a loss of academic experience and learning for students – according to the UEI study, 64% of students believe that they’re learning less in remote classes than they would have in person – but a loss of the connections they’re used to forming with the people they teach. Liming says there’s “so, so much” she wished she could have done with her students this semester. She lists off some of those things, longing to, “Talk openly and anarchically; share food; celebrate our successes and milestones together, by gathering together in a room…”

But for all the things professors missed out on doing this semester, they also learned a lot that they’re going to take with them into future semesters, even when classes switch back to being in-person.

Zale, who started calling directly on students to make sure participation requirements were being met even in this new digital landscape, says, “I like calling on people by name, it turns out. I’m going to do it more in person, once we get back.” He found it a good way to make sure even the quiet students won’t fall by the wayside during class discussions.

Spiezio-Davis has also come out with something she’ll keep utilizing. “One-on-one meetings were one of the most rewarding aspects to my curriculum [this semester], though they were extremely time consuming,” she says. “I will keep them, but organize them differently for next semester.”

Faced with less-than-appetizing teaching conditions, a larger workload than they had holding in-person classes, and an environment prone to encouraging shorter attention spans and lower engagement levels in students, Champlain professors never threw in the towel. They used these challenges to push them into expanding their teaching skill-set, adapting to new ways of engaging with students, and streamlining their courses for the first-ever flex-hybrid semester.

It has been an undeniably difficult past four months, for students and teachers alike. And, admittedly, some professors have given students much less leeway with adapting to those changes than others. But as a whole, professors are working just as hard to help students as those students are to meet their expectations.

Despite all the difficulties of this flex-hybrid semester, professors are coming out with silver linings. Liming and Spiezio-Davis both mention how grateful they are for the Champlain community, which has taken the threat of COVID very seriously and dealt with it well. The community has still managed to, according to Speizio-Davis, foster a sense of belonging for faculty and students alike.

Zale, however, says easily that the best part of this wholly difficult semester is “the personal accomplishment of very many students, which I believe to be tremendous and praiseworthy. I can’t speak to the institution as a whole. But on the individual level, most students dealt with it very well, and it should give them confidence.”

Overall, this has been a very per adversa ad astra sort of semester for everyone. Students and professors are still in the throes of adversity, and some may be having trouble even visualizing those promised stars. But what’s important is that the Champlain community made it through the semester.

That’s another thing Zale points out. No matter how challenging this semester has been, here we are, coming out on the other side. What made this semester worthwhile for him was his students, and of them he says, “They should be able to say to themselves, ‘What I just did, I didn’t think I was going to have to do anything like that. But I have just done it.’”