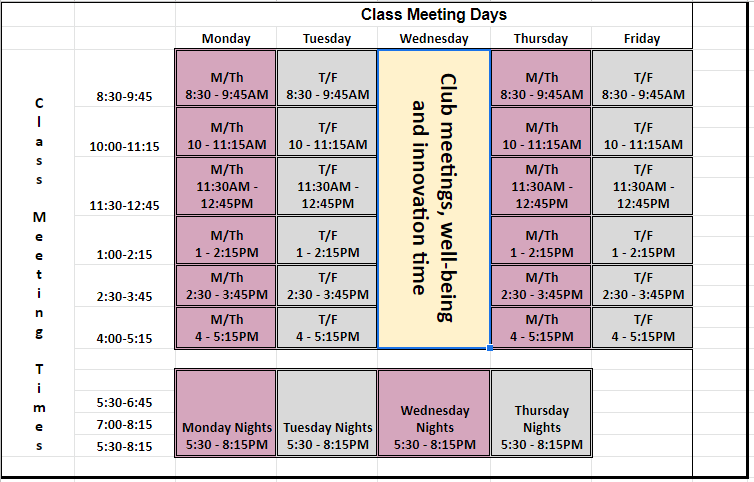 A new schedule is in the works for the 2020-2021 school year. The Champlain College administration has been brainstorming improvements to the schedule for the past year and a half. One of the most significant changes is that there will be no classes on Wednesdays until 5:00 p.m.

Other changes include classes beginning in the morning at 8:30 a.m. instead of 8:00 a.m., and class periods having two days in between them. For example, a class will take place on Mondays and Thursdays or Tuesdays and Fridays.

The Champlain College schedule has not changed in over 20 years; however, talks of changing it have been in place for several years. Much of the reasoning behind this alteration came from students, faculty, and community members.

Champlain’s Registrar Tara Arneson went through the Student Government Association to send out a survey about a potential new schedule at the beginning of the 2019-2020 school year.

Over 500 students answered the survey, about one-fourth of Champlain College’s student population. In general, students favored a large section of time for work instead of small portions throughout each day, explaining the lack of classes on Wednesdays.

“This now opens up time and space for students, faculty, and staff to engage in meetings, have innovation time, well-being time; we heard a lot about that. People wanted more time for the things they wanted to do and to be able to collaborate,” Arneson said.

Jennifer Nicholls, Special Assistant to the Acting Provost, mentioned that this gives students time to do homework, and participate in internships and jobs. Arneson added that this time would allow for more guest speakers on campus and students wouldn’t have to work around their class schedule to go to certain events.

“I think it gives you just a break in the week to kind of, do some reflection time, do some exercise, or just sleep extra time. I think those are important parts of us thinking about it. It leaves time for students to meet and do some collaboration on team projects and things like that, which is a big part of the coursework that we have at Champlain that we don’t always make time and space for, students just have to fit it in. So now we’re actually allocating time for that,” Nicholls said.

Arneson mentioned that there would likely be challenges, but they would work at them along the way.

“I’m a wait-and-see kind of person. We’re going to see how it goes in the Fall and hopefully for the next academic year, in Fall ‘20 and Spring ‘21, everything runs smoothly. But there’s going to be hiccups. We’re going to run into bumps, and we’re going to figure out as we go. It’s a change we’ve heard people asking [about] for years,” Arneson said.

Arneson, as well as other people who have worked on this change, communicated these changes to students on Feb. 3, 2020. Additionally, they will be putting up posters and tabling at IDX to answer any student questions or feedback. The tabling will take place on February 14, 21, and 26, all from 11:00 a.m. to 1:00 p.m.

Tara Arneson, Jennifer Nicholls, and others behind these changes want the students to know that they were thoughtful in this process and wanted to make the schedule better for the students.

“Some people have referred to the schedule as ‘Wellness Wednesday’ and I want to make sure that we don’t say that the only day where there is wellness is Wednesdays. I think wellness should be embedded throughout a student’s experience… Whether that means extra sleep, eating healthy, exercising, breathing, you know, just reflecting. Those are all important pieces and it doesn’t mean we would only do that on Wednesdays,” Nicholls said.

Many students have opinions on these changes.

“I can see where the intent is, but I think that having the break on Wednesday would make students lose motivation, you know, especially in the middle of the week. I don’t know if it was Friday I feel like it would be a lot better,” Mills said.

Other students are curious about how their motivation will be affected by the alterations to the schedule. Skye Padovani (‘23), a Communications major, also understands the intent of the changes but isn’t sure about how they will be executed.

“From what I’ve heard, the Wednesday schedule is going to be a bunch of programming throughout the day to help promote inclusivity on campus and mental health and keep us feeling better because we get that break in the middle of the week. But I don’t really think it’s going to do much, especially if the programs aren’t mandatory. Because honestly, I’ll probably just use that day to sleep,” Padovani said.

She also explained how she likes her schedule to look, and that the new schedule may not fit what she enjoys.

“I want to be able to get all of my classes in at a certain point in time, and if I can only get a late class on Wednesdays, I wouldn’t be too happy about it, honestly. Because I like early morning classes… So having that whole day to do nothing is kind of a detriment for me,” Padovani said.

Opinions vary from student to student, and they will be able to offer feedback once experiencing the changes this fall.