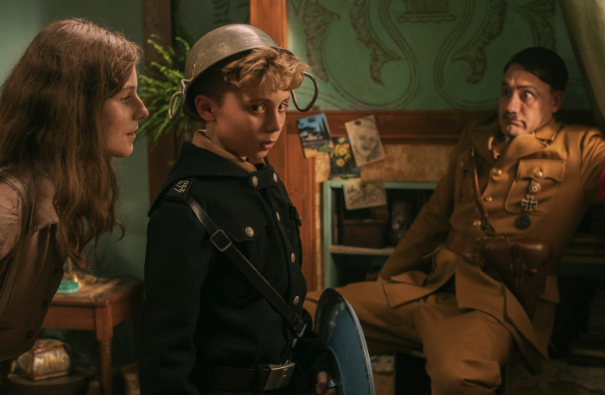 Never in a million years would I have guessed that the funniest film of the year would be about Nazi Germany. I mean, how could anyone find anything funny about a political regime that led to the deaths of millions of Jewish people? While there have certainly been movies in the past that have tried to mock Nazis through comedy, none have been as brazen as Taika Waititi’s Jojo Rabbit. This film is not only a genuinely hysterical comedy, but also a fairly insightful and, at times, disturbing look into the dangerous effects of blind patriotism.

Jojo Rabbit tells the story of Jojo Betzler (Roman Griffin Davis), a ten-year-old boy who wants nothing more than to serve his country, and who believes whole-heartedly in the government’s political ideals. The problem with Jojo’s extreme patriotism is that his country happens to be Nazi Germany, and his fanaticism is starting to disturb his free-spirited mother Rosie (Scarlett Johansson). Jojo’s adoration for the Nazis is so extreme that he daydreams of having Adolf Hitler (Taika Waititi) as his closest companion and imaginary friend. However, everything changes for Jojo when he discovers his mother is hiding a Jewish girl named Elsa (Thomasin McKenzie) in the attic. This revelation forces Jojo to re-examine his political convictions, and he must slowly come to terms with the fact that his country is on the wrong side of history.

While it’s easy to see how a film like this can offend, I can’t say that I found Jojo Rabbit’s humorous portrayal of Nazis to be tasteless. In fact, I think this film uses humor in a very clever way, to touch on some heavy issues through comedy. The reason that this movie can get away with a lot of silly jokes about Nazis is that the satire serves a greater purpose in the narrative. Jojo’s imaginary conversations with Adolf Hitler are a great example of how the film uses goofy humor in an intelligent manner, proving to be a hilarious way to show Jojo’s inner psyche, such as his conflicted feelings towards the Nazi Party. Another reason this film works as well as it does is because of the fantastic performances of the cast.

The entire cast of Jojo Rabbit does a phenomenal job with the material they are given, and they prove essential in helping the film achieve the tonal balance it needs to succeed.  Roman Griffin Davis is a revelation acting as Jojo and does a great job of making a character who shouldn’t be relatable feel very human. Scarlett Johansson displays brilliant work as Jojo’s mother, Rosie, as she proves to be a heartwarming presence whenever she’s on-screen. Taika Waititi is hysterically over-the-top as Adolf Hitler and does a great job of making sure this character is portrayed with the least amount of dignity humanly possible. However, the best performance in the film is clearly that of Thomasin McKenzie, as her nuanced portrayal of Elsa is what keeps the film grounded in some kind of reality.

At the end of the day, Jojo Rabbit is an incredibly clever and shockingly funny film about some of the worst human beings who have ever walked the face of the Earth. This is a movie that uses humor to touch upon numerous themes regarding the dangers of fanaticism, all while relying on wonderful performances to keep the story grounded. The message of Jojo Rabbit is clear and simple, as it shows how blind adoration of your country isn’t noble, but disturbing. Considering we live in a world where I’ve heard many people say “If you don’t like this country, just leave,” it’s a message that feels incredibly relevant today.