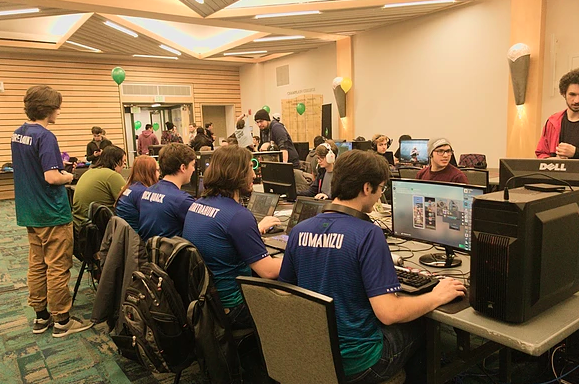 This article was originally published by Champlain Arcade.

On Friday, November 8th at 8pm until Saturday, November 9th at 8pm, Champlain College Esports hosted the annual Extra Life fundraiser in the Champlain Room. The event kicked off with more than 50 attendees. After a quick check-in, attendees were given free reign of the room. If they brought their own gaming system, tables were set up so gamers could plug in and play whatever they wanted. On the other side of the room were scheduled tournaments, starting with the Round 1 Champathon for Google Pac-Man.

Throughout the 24 hours, gamers and their supporters raised $1,551 for UVM’s Children’s Hospital; competed in events for League of Legends, Mario Kart, Jackbox Games, Lethal League, CS:GO, Smash Bros., and more; and came together to support one another through their shared passion: gaming.