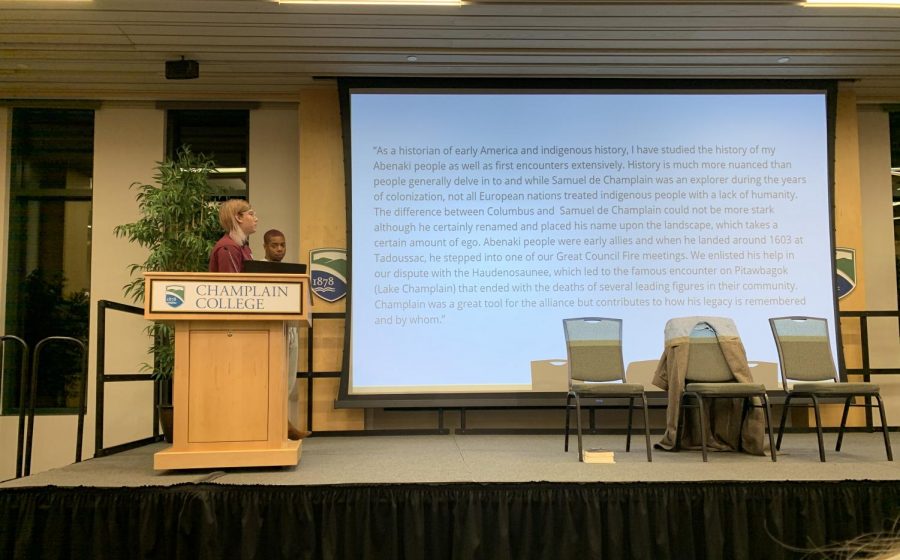 This past Wednesday, November 6, a forum entitled Let’s Talk About: Samuel de Champlain Statue was held in the Champlain Room from 6:00-8:00pm. Roughly 50 students, faculty, and staff were present at this SGA-run event, as well as Bruce from CPS and Champlain Alumni Chief Stevens of the Abenaki tribe.

Jayy Covert, Kenneth Bufford, and Mads Sumpf led the forum from on stage, beginning with a short presentation on the topic. They displayed statistics showing mixed results when it came to who wanted the statue removed, who wanted it to stay, and who chose another option.

A microphone was passed around the room and every single person was told to air their opinion. “I don’t want it in a museum,” said Jadah Bearden, a student in the audience, “I don’t want it next door, I want it gone. Whatever hesitations you may have about the removal, just know that the hurt should be louder than your apologist rhetoric.”

Student Beatrice Española, stated, “My reading of the statue is that it represents racism and colonialism in America…. I wonder if having that dialogue between two statues would change people’s experiences moving through the campus.” Another student countered, “While Samuel de Champlain did overall contribute to colonialism, that’s not what the statue represents. He’s holding a telescope… it represents his relationship with the Abenaki. The artist wanted to represent this, as well.”

In an interview with Seven Days, the creator of the statue, Jim Sardonis, tells readers, “…I was happy with what I did, and what I felt in some ways honored the Native people in that [de Champlain], I felt, had an affinity for the way that they lived and worked.” Sardonis was not invited to the forum.

Though the cost of removing or curating a statue is currently unknown, other students, as well as Chief Stevens, brought up the possibility of donating money to current and future Abenaki generations. This income could be from a whole separate fund, or even take the place of the money used in the statue debate. what would have been used in regards to the statue or a whole other fund that would be discussed in the future.

To get more insight from Abenaki tribes in the region, Covert contacted Melody Walker Brook of the Elnu Abenaki Tribe, who gave a written statement saying, “…what would be most appropriate is actually to add a statue for indigenous people next to the one of Champlain. This is how people learn. Understanding the connections that are possible between people and acknowledging the indigenous voice is essential.”

On the other hand, Chief Stevens gave his support to the forum, but stood on no particular side in removing or keeping the statue. He instead stated, “You don’t have to tear something down to build something up.”

Chief Stevens chatting with students after the forum.

So what happens next?

SGA President, Molly Aldrich, says that bigger conversations like these are needed to make a definite decision. On Monday, the topic will be brought to the House of Representatives meeting for further discussion (You can find a livestream of all House of Reps meetings on our Facebook). A student also pointed out how a huge portion of the student body was not present at the forum, which they believe is another key piece to creating a successful discussion.

To end the forum, Chief Stevens thanked SGA for bringing the Abenaki into the conversation, “I get invited a lot by students, not by faculty. You have to get faculty to start buying in to inviting us here.”

He reflected on how, no matter the final decision, everything will lead back to the Abenaki people more than anyone on Champlain’s campus. Leaving the audience with a final note, he said, “You can’t erase history. When you erase history, then people forget about it. Be careful how you approach this… if you’re going to be an activist, be a responsible activist.”

For more information on these proposals from SGA, you can visit the forum’s Facebook page.