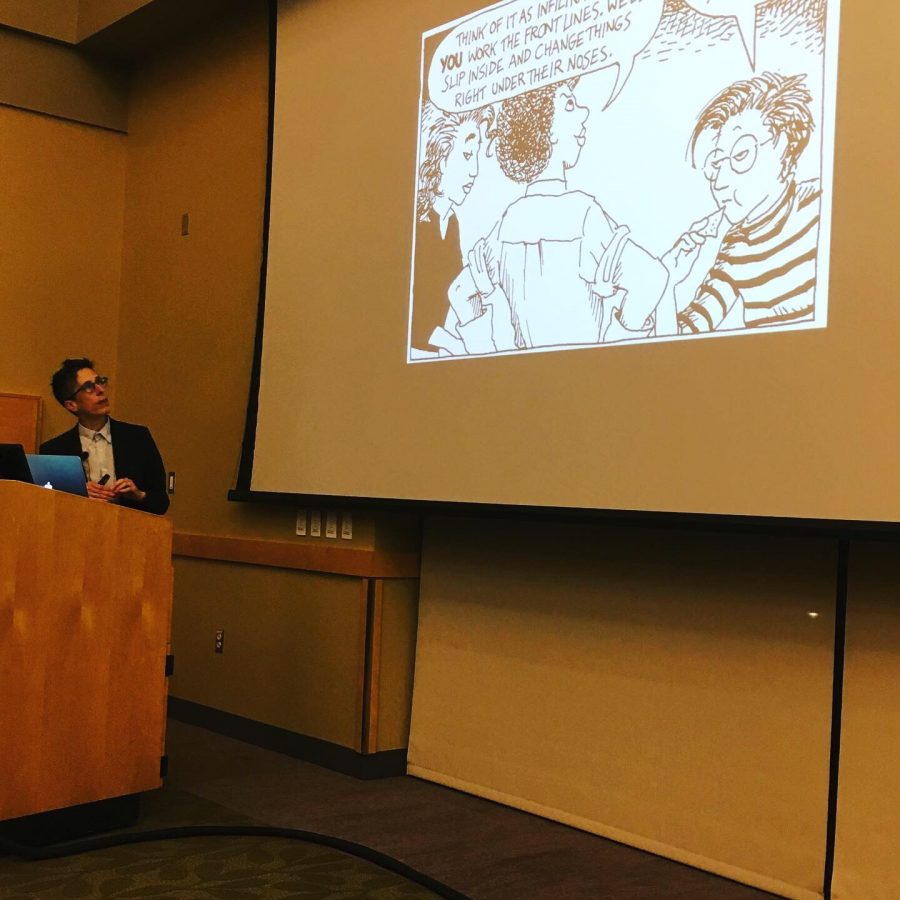 Bechdel Introducing her comic series Dykes To Watch Out For.

On Wednesday, October 2, Alison Bechdel was invited by the Vermont Humanities Council for their “First Wednesdays” lecture series to give a presentation about comics as activism.

Bechdel is a Vermont cartoonist who wrote the comic Dykes To Watch Out For from 1983 to 2008, as well as two graphic memoirs: Fun Home and the sequel, Are You My Mother? She is currently working on her third graphic novel, Secret Superhuman Strength.

For instance, there is a graphic novel called March about the civil rights movement. One of the authors is John Lewis, a civil rights leader and United States Representative for Georgia. He chose the format of a graphic novel because of the comic Martin Luther King and the Montgomery Story. This comic inspired him to take a stand in the civil rights movement of the 1960s. Bechdel speculated that Martin Luther King and the Montgomery Story decided on this medium because of a book called Seduction of the Innocent, which discusses how comics corrupt youth. Instead of information from this book being seen as negative, people saw the persuasive potential and influence comics could have.

In Bechdel’s own experience, she began creating the Dykes To Watch Out For column because she wanted to showcase the civil disobedience her friends participated in to give visibility to gay activism. At the time, it felt “subversive and radical” to be creating a comic strip about lesbian women. Ultimately, she wanted to “prove to the world that it was okay to be gay.”

Over time, Bechdel said that there has been a “seismic shift in the LGBT[Q+] community” and her comics now seem historic and dated. Many of her comics reference political events of the time, which have lost meaning and relevance to younger generations. However, her comics now serve as a kind of historical document to record gay history and activism.

Grateful for this, Bechdel said, “I feel lucky to be able to be a part of a liberation movement.”