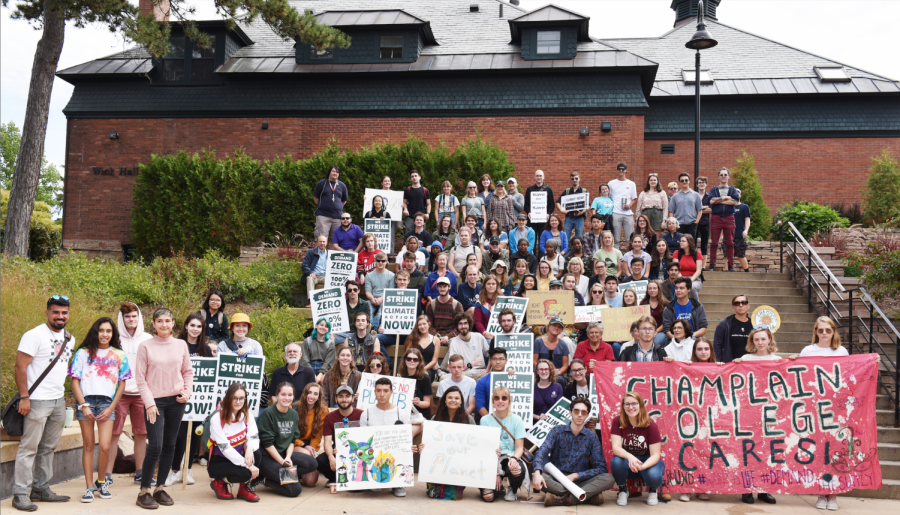 Over 100 Champlain students, faculty, and staff walked out of their classrooms, workplaces, and residence halls to join the Burlington Climate Strike. Sarah Cipollini, senior environmental policy major with a minor in social justice, gathered strikers in Rozendaal Courtyard on September 20.

“I noticed that nothing was happening on campus, so I decided that something should,” said Cipollini. Megaphone in hand, she led Champlain College down Main Street toward City Hall, chanting, “What do we want? Climate Justice! When do we want it? Now!”

Champlain’s group met up with UVM’s own rally, and the two schools marched down to City Hall together. There were so many people that traffic had to be stopped. Even Edmunds Elementary students stood on the side of Main Street to support the cause.

In front of City Hall, speakers gave speeches, recited poetry, and led the crowd in song, all in support of saving the Earth, as well as the passing of the Green New Deal. “Globally [there are] more than 1000 climate strikes in 137 countries,” stated one speaker.

Students, doctors, and politicians addressed the importance of climate justice. Another speaker pointed out that the World Health Organization has moved air pollution and climate change to the top of its Ten Threats to Global Health.

Over two hours later, the rally ended and music provided by the Brass Balagan started up. Participants were encouraged to stay and write their devotion to climate justice on fabric strips, which can be found weaved in the chain link fence surrounding City Hall Park.

“I think it went awesome! The amount of people warms my heart,” Cipollini commented. “I hope this will encourage more people to tune into the UN Summit coming up.”

Lars, a senior professional writing student at Champlain College, had different thoughts. “I don’t think it’s enough. We need more than just this. I’m impressed but this is a small stepping stone in a more grand picture.” Sofia, an environmental studies and political science major at UVM, was more hopeful, saying, “I don’t know what I was expecting, but it was amazing.”

To end the rally, Becca Ballint, Majority Leader of Vermont, cried out, “Change is possible and it happens in small conversations… it’s about commitment and hope and fierce love, and you are showing fierce love to the planet today.”